Congrats to Richard Nedomlel as he signed an ATO agreement to join Grand Rapids of the AHL for the remainder of the season. Detroit drafted Nedomlel in the 6th round of the 2011 NHL draft. I’d say it’s a pretty good indication that they are happy with the kind of season he has had that they’re bringing him in to have a look.

This is a great opportunity for Nedomlel to get a taste of the pro game. I talked about Brycen Martin getting a taste of the WHL game and recognizing the things he has to work on to make it here. I think it’s similar for Nedomlel. He can get a taste for what it takes at that level and recognize the things he really has to work hard at in order to get there.

It was breakout season for the Czech offensively. He went from 10 points as a rookie to 46 in his second WHL season. He did that as a huge part of one of the top power plays in the league. That quick/accurate shot he takes from the point is one of the more effective power play weapons in the league. It was quite a development for a guy many pegged as a physical defensive specialist. Nedomlel can still hit really hard, but this season we learned there is more to his game.

Nedomlel is still eligible to return to Swift Current for two more seasons. This is part of a longer term process that he will be a part of with the Red Wings. 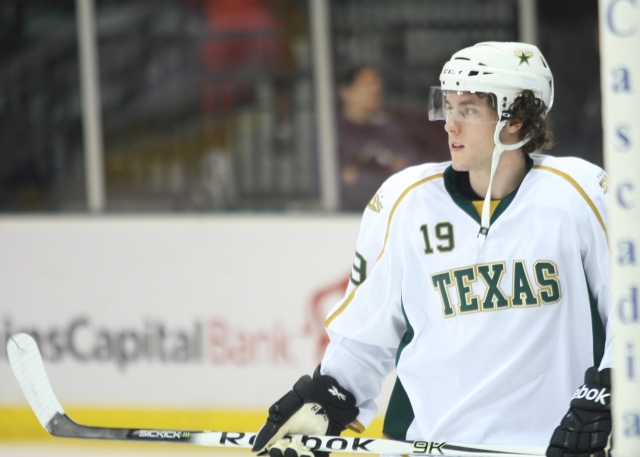 FIRSTS FOR VAUSE AND GROENHEYDE

It was a good Sunday for a couple of graduated Broncos. Taylor Vause scored his first career AHL goal in a 4-2 Texas Stars win in Toronto. Vause scored it on a turnover to give Texas a 1-0 lead.

Meanwhile, Jon Groenheyde stopped 23 of 24 shots for his first career Central Hockey League win as Allen beat Wichita 3-1. It was the final game of the regular season for Allen. Groenheyde has a 0.941 save percentage over 2 games with the Americans.

I hope they can both make enough of an impression to earn an opportunity next season as well.

The Swift Curent Midget AAA Home Hardware Legionnaries held their spring camp over the weekend. You can see the whole roster here. It was a smaller “invitation” only camp for the Legionnaires fresh off another shake-up as they let go of Coach/GM Jason Johns after the season.

Who is going to take over? I’m sure many of us have heard the same names. It’s important to remember that right now the Legionnaires practice as noon. That practice time rules some people out.

Even if it takes a little longer I hope they can find someone they are going to be able to keep for several years.

Hayden Johnston had a goal and a couple of helpers in a 3-2 Swift Current win over Weyburn in the first game of the South Saskatchewan Midget AA final tonight. The Hurricanes have yet to lose at home during the playoffs. Game 2 is in Weyburn on Wednesday.

If there is a game 3 it won’t be until Monday because of Sask First.

I wans’t able to make the game today (Colin Powers had it covered for us as he has been covering the Hurricanes all season) but I heard the crowd was  much better behaved. I love the passion the Hurricanes have inspired and I’m glad that support came out in a positive way tonight.

It’s been a great season for former Bronco Tim Tisdale and the Hurrianes. They’re one win away from celebrating now.

Former Bronocs like Andy Schneider (current Assistant Coach), Luke Hunger and Todd Hornung came up just short in their chase for a provincial title over the weekend. They were playing for Shaunavon in the Senior B final and lost both games to Drake. It was the fourth year in a row that the Badgers have made the provincial finals and lost.

On one hand that is excellent and admirable consistency. On the other hand, it’s gotta be frustrating for the Badgers to be the Buffalo Bills of the senior hockey provincials.  I was hoping for a different result for them this year. Congrats anyway to a team that had a very good season. They won the Whitemud league and had a great provincial run again.

Few surprises in the opening days of the WHL playoffs. I picked Brandon in their series with Calgary and am not surprised to see the Wheat Kings have some success against what had been an inconsistent goaltending tandem in Calgary. Regina/Moose Jaw is almost exactly what you would have expected. Regina’s win was the kind of win they are going to have to get to win the series. The Moose Jaw win showed what can happen when their much deeper offensive group gets going. Edmonton just has too much talent for a very game Kootenay team and I think the Medicine Hat/Saskatoon series is still anybody’s game. However, game 3 is clearly a must win for the Blades and Ice.

That will do it for me tonight. I’ve still got lots of things I want to talk about in the coming days and weeks. Again good luck to the young Broncos as they battle to make an impression in pro hockey.