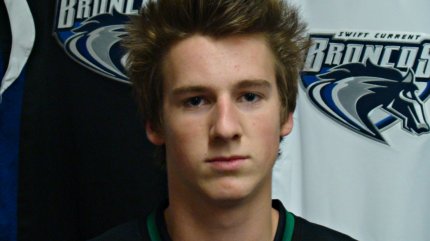 This Swift Current Broncos have added to their forward depth by calling up forward Denis Bosc from Steinbach in the MJHL. Bosc was close to making the Broncos at training camp and was one of the final players sent out. At the time Coach/GM Mark Lamb said he wanted to see Bosc work on his hands and put up some points in a bigger role in Junior A. Bosc had gone on to be one of the leading scorers on his team in Steinbach and earned a spot in the CJHL top prospects games. He scored 16 points in 18 games so far this season and hat a hat trick a few weeks ago. He also put up 2 assists in the 2 top prospects games he played in. Those are big steps up from his 21 points in 52 games for the Pistons last season.

Bosc skates well and seemed to be a reliable/intelligent player when he was here in training camp and pre-season. The points didn’t come at that time but perhaps he returns to the Broncos with more offensive confidence now after a good run in the MJHL. That doesn’t mean you should expect him to put up a point per game pace in the WHL. It’s a big jump and it’s likely Bosc won’t start in the kind of top 6 role he had in Manitoba. He will probably have to come in and prove himself at this level before he gets those types of opportunities. However, this is a great chance for Bosc and a good opportunity for the Broncos to see what he can bring to the table after two months of hard work in Steinbach.

Right now the Broncos are short bodies with Howorko and Benson dealing with “upper body” injuries. Daniel Dale also appears like he might not be 100% right now although I don’t know how serious that is at this point. Even with Dale they’re down to 12 healthy forwards so the addition of Bosc can bring some insurance and some competition back to the lineup. It’s always important to have an element of that so that guys know there is someone else there ready to play if you aren’t.

Bosc is expected to be here for tomorrow’s game against the Oil Kings. I’ll catch up with him for a chat as soon as I can.

The other move Swift Current made today was inking Jake DeBrusk to a WHL contract. He had 33 points in 26 Minor Midget AAA as a 15-year-old and has stepped it up with 18 points in 14 games in Major Midget AAA so far this season. He’s a smaller player but at last listening he is up to 5’6 after being I think only 5’2 when he was drafted. Of course Jake is also the son of former NHLer Louie DeBrusk who is now an NHL analyst. That means we might soon have a professional listening to my broadcasts and he’ll quickly figure out I’m a hack!

Jake isn’t necessarily the style of player that Louie was, but his coach in bantam told me he didn’t back down from the tough areas. Here is some more information on DeBrusk from some previous interviews I’ve done:

I’ll try to catch up with him tomorrow for an interview. You can check back here to see that later.

Debrusk is part of what looks like it will be quite a strong draft class. He now joins Brycen Martin (who is on the team), Zack Gonek, Cavin Leth, Dakota Odgers and Jordan Wittman as signed prospects from that draft. There are several other guys in that age group who look like they could be players here down the line. Skilled forward Cameron Hughes really impressed and training camp (and is doing well in the AJHL), goaltender Alec Dillon is doing well with big minutes in Junior B and defenceman Cole Bevan seems to be taking on a big role successfully as a captain in BC Major Midget. It will be interesting when that whole class comes to training camp next year. They should create some tough competition.

Play by Play Broadcaster for the WHL's Swift Current Broncos on 94.1 FM The Eagle.
View all posts by shawnmullin →
This entry was posted in Uncategorized and tagged 2011 Bantam Draft, Denis Bosc, Jake Debrusk. Bookmark the permalink.