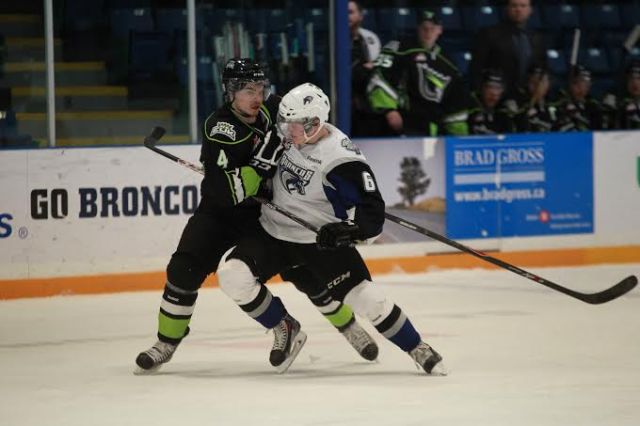 The big day is here. The Swift Current Broncos could have their first pick in the first round of the NHL draft since 2000. Julius Honka is in the first round on most draft lists and would appear to be a good bet to get picked in that round. However, we’ve seen in recent years a history of players considered smaller defencemen sometimes slipping in the draft. I think that would be a mistake if teams let him slide.

At times we’ve seen Brycen Martin also listed as a potential first round pick. At this time it looks like Martin will end up in the second round. To me Martin is a guy who has all the tools and is very close to having it all come together for him. He had some great moments last year where you saw he could take on top opposition and play a terrific two-way game. It’s a matter of everything coming together in a consistent way. Based on his skill-set, size, history and the improvement we’ve seen there is no reason to think he won’t be able to do just that.

Brett Lernout is one of the fastest rising prospects this year. He came completely off the radar and now you hear people talk about him jumping up into 3rd or 4th round consideration. Why? He showed he’s more than just a physical player. He put up points on the PP with Honka away, got shots through and played some huge minutes on D against very good players. He was raw when he got here and there is a lot more to him. This is a player to watch.

Colby Cave and Coda Gordon are two veterans who have been through the draft before. Sometimes teams will let them pass because they can get a shot at them as free agents. On the other hand, they are such valuable players who have progressed significantly over the last year that you would have to think some teams will think long and hard about them. Especially in a draft that is considered a little bit leaner for depth.

You haven’t heard as much of Landon Bow’s name since the first half of the season. He emerged into the rankings with a great pre-season and start to the regular season before he had some up and down games and Eetu Laurikainen got the bulk of the workload down the stretch. Bow showed significant signs of a guy read to be a legit starter and a guy who can make big strides in his mobility/lateral movement. When you see that with a goaltender of his size you take notice. It may not be until late, but Bow could be a guy who gets drafted. I wouldn’t count him out.

Maybe there would even be another surprise. Either way it’s exciting to be a Broncos fan today as we watch the start of the first round. I wish all of them the best of luck. Mark Lamb always says it’s just the start of something not an ending. Even if you don’t get drafted there are a pile of opportunities… and if you do you still have to earn it.

For the second straight year Dillon Heatherington has been invited to the World Junior summer camp for Canada. He is among the 41 best players in his age group according to Hockey Canada. This time as a 19-year-old the chances would be that much better for him to make the actual roster this time. I talked to Dillon about that, his draft experience and some other topics.

It’s that time of year when the schedule comes out for the WHL in the pre-season and regular season.  You can see the pre-season schedule by clicking here and the regular season schedule by clicking here. Hard not to get the itch for hockey again when you see that isn’t it? I’m looking forward to the Broncos getting back to Maple Creek again this year as well. That and I always enjoy the trip to BC.

Congrats to Justin Dowling and Taylor Vause as the two former Broncos hoisted the Calder Cup as AHL champions with the Texas Stars. Dowling in particular was very impressive in the playoffs and continues to move up the Dallas prospect depth chart. In talking to Mark Lamb the other day he wouldn’t be surprised if that turned into an NHL opportunity. Adam Lowry’s St. John’s Ice Caps were on the other side of that Calder Cup final. It’s nice to see the three most recent Broncos captains all having success in professional hockey like that… and the one right before them (Cody Eakin) was impressing in the NHL playoffs after another strong regular season. There are several examples of former Broncos having success at the next level scattered throughout the professional ranks.

Congrats also to Willie Dejardins who coached Texas and ended up getting the top job with the Vancouver Canucks. I’ve only met him once but he seems like an absolute first class guy. I remember my first and only meeting with him he told me the year before Taylor Vause’s last season in junior to watch out for Vause because he was going to have a huge season. He was right on as Vause was Swift Current’s MVP and an over point per game player that season.

The last piece of news is the biggest that has happened in a few weeks since I’ve posted. Darren Evjen has stepped down as the Associate Coach of the Swift Current Broncos.

Evjen is stepping down to spend more time at home with his family. He’s got young kids and I can imagine it got to be hard to be away from them as much as he was during the season. It’s not just the road trips. As a coach you are basically MIA all weekend long. You get back from a road trip and you’re right back up prepping the next game the next morning. It’s a seven day a week job with crazy hours all hockey season… and it’s still a lot of hard work in the summer too. Evjen is a Swift Current product and will still make his home here as he goes back to teaching. The Broncos will find a way to tap into what he has to offer in some capacity. He still wants to be a part of what he has helped build here and it’s just a matter of figuring out how.

I just want to take my chance on this blog post to say thanks to him for all he has done for me. From all the interviews he’s given even in some very lean times for the team to making me feel a part of the crew on the road. When you talk to anyone about Darren leaving they immediately talk about his positive attitude and how he was always smiling. I’d say that will be missed yet I also know he’ll still be around.

There has been a major change in the organization in recent years and Evjen has been a huge part of that changing culture. Whatever happens from this day forward his fingerprints will be all over that. He was a winner as a coach in Midget AAA and when the Broncos become a winner here like they want to be they can thank Evjen for lending a major hand in getting them there.

I talked to Mark Lamb about Evjen’s departure, what they will do to replace him and a lot of other topics.

I know there is even a lot more news to talk about including Dale Weise getting that nice new deal from Montreal after a very good playoff run and the alumni tournament. The blog hasn’t been as active as I’d like it to be recently so I will do my best to add more here. A busy new job, buying a house and expecting a kid keeps you busy! I’m also thinking that since it’s not really a news source (Swift Current Online and the Broncos site have the news in plenty of time) I should turn this even more into a commentary site and a place to host my audio. That’s the way I’m going to try to lean going forward. We’ll see how that goes.

Now to go watch the draft!