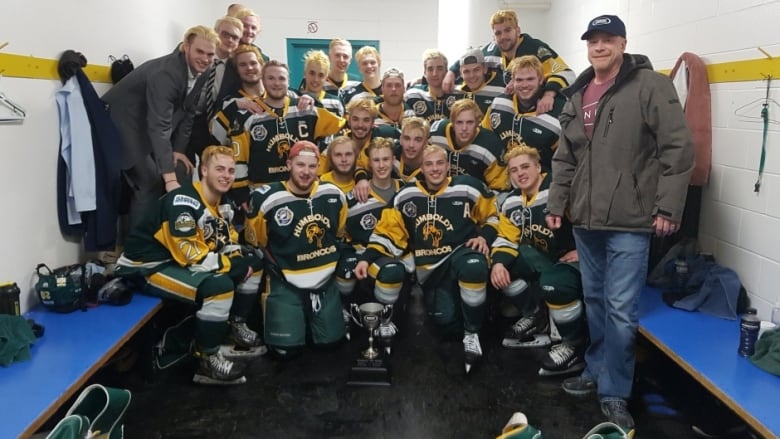 Any of us who have spent a significant amount of time on a hockey bus could picture it. Where everyone was sitting. Coaches cutting video clips, players napping on the floor, showing each other a funny text they got, watching a movie on their iPad… and you know there’s a card game going in the back.

One year ago today there was a horrific buzz at Mosaic Place just before we went on the air for Game 1 between the Swift Current Broncos and Moose Jaw Warriors. Something awful had happened with the Humboldt Broncos on the road to their playoff game in Nipawin.

Nobody really knew how serious it was and the information was only really starting to filter in as the players got ready for puck drop. Coaches found out and would let their teams know at the conclusion of the game.

I honestly don’t remember anything about Game 1 outside of this horrible feeling in the pit that this didn’t matter right now and how on earth can you focus on the excitement of a game while the hockey world is dealing with this kind of loss?

On that note today I don’t think there is any sense giving much thought to the game itself.

If you’d like to take a look back you can click here for the link to our recap from Swift Current Online. It also includes video of Swift Current’s goals that night.

Otherwise all thoughts today will be with the family and friends of those hurt or lost in that awful crash last year. The connections to Swift Current run deep from the shared heartbreak of two communities experiencing the heartbreak of a hockey team touched by a deadly crash to all the personal links. The name Broncos will always be bonded in shared grief.

We know Ryan Gobeil of the Broncos front office has gone on to hold two massive fundraisers for STARS Ambulance after all his brother Morgan went through. We know Matteo Gennaro of the Broncos spoke at the funeral for his best friend Stephen Wack a day after winning Game 7 against Moose Jaw. We know now Swift Current coach Dean Brockman returned quickly to Humboldt to help with the aftermath in the community where he had coached for 17 years. We know former Broncos from 1986 also found their way to the community to offer their support.

Just on our broadcast team intermission analyst Joell Haugan was cousins with Humboldt’s coach Darcy Haugan and shared so much with us about the great man he was.

I thought back to interviewing Adam Herold for a podcast I did ahead of his selection in the bantam draft. What an impressive and mature young man he was.

I could go on and one listing those connections.

We remember all the vigils across Canada and packing into the iPlex sharing our grief.

At Golden West we remember our colleagues Tyler Bieber and Brody Hinz. I have learned a lot about Tyler from people who were great friends of his and wish I knew him the way they did. He left a tremendous legacy with his passion for local sports and volunteerism in his community. As a fellow broadcaster you feel like attaching yourself to Tyler, but he wasn’t like many of us in our intense pursuit of and focus on calling hockey games. His community work in sports was his biggest passion from what I understand. That’s the legacy he leaves. A true on air talent and from what I’ve learned an even better friend.

It was a weird feeling being able to feel a connection with those who were lost without really having anyone specific to grieve. I think all our hearts were heavy with grief for those families and friends even if we didn’t have to live with that same kind of awful loss ourselves.

Better writers than me with a better grasp of how to take that day will write much more impactful things today. I just don’t think I can spend the time to really dig into that game because it just doesn’t matter. Not right now.

What I think I’ll remember most about the broadcast is sitting in the media room with Kelly Remple asking him how on earth do I call this game tonight? How can you be excited about a goal while there are families on pins and needles waiting to hear about their children? It was the most surreal and heart wrenching night.

But the other thing I’ll always remember is how the hockey community, the country and really people around the world came together to support those families.

Sometimes in tragedy we learn about the worst in people. Sometimes we see their best. I’m glad we saw the best in a lot of people out of this horrible loss.

Now one year later all I can think is that I hope those who continue to grieve today are closer to some level of peace. They are in all our thoughts.